Home » Megan Dethier on the Search for a Starfish Killer

Megan Dethier on the Search for a Starfish Killer

Starfish have a superpower, one that seem almost magical—they can regenerate entire limbs. If one of their five appendages becomes stricken with an incurable disease, they just drop it off and grow a new one. No problem.

That is, until it became a problem—a very big problem. In 2013 and 2014, scientists started noticing that west coast starfish weren't their usual regenerative selves. Instead, they were just turning to mush. In some cases, disease expert Ian Hewson says, their limbs would fall off and walk around the ocean bottom like headless zombies.

"They're almost indestructible, so this must have been really bad," Hewson told Popular Mechanics. "Usually, they would just lose a limb. This time, they seem to have hit the self destruct button." The disease comes on quick, with sick starfish—or sea stars, as scientists call them—displaying symptoms starting with pockmarked lesions, then twisted and contorted arms, followed by an inability to cling to rocks. Finally, after only 48 hours since the onset of symptoms, they disintegrate into a slimy white sludge. Hewson, and his team of scientists, needed to find out what was going on.

Starfish, of course, aren't a species easily eradicated, mostly because they can be almost indestructible when they're healthy. You can cut them up into three pieces and get three sea stars. If you cut an oyster or a mussel in half, both pieces die. "They're incredibly good at regenerating," says Megan Dethier, a research professor at the University of Washington. "We can look to them for the potential for regeneration in more complex organisms." PC// Caren Chesler 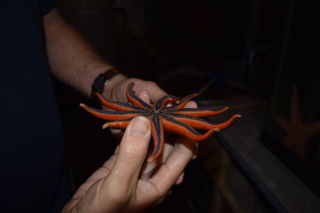 From a biological standpoint, starfish have an unusual anatomy. Instead of blood coursing through their veins, they have water. They take in that water through a little pore and pump it around their bodies as a means of propulsion. No other animal does that, Hewson says. In the name of research, scientists have thrown everything they can at starfish to test their limits. They put them in horrible water, with salinity levels much greater or much less than what is in the ocean. They've subjected starfish to all kinds of physical disturbances, kept them in the dark for long periods, vivisected them, and taken out internal organs. Still, they don't die.

"We can take bacteria that we culture from the environment, in an incredibly high density, until its milky white, and they still don't die," Hewson says. "They're fascinating animals, the whole group of echinoderms, their resilience, their development, their evolution."

Which makes this mass-killing virus all the more ominous.